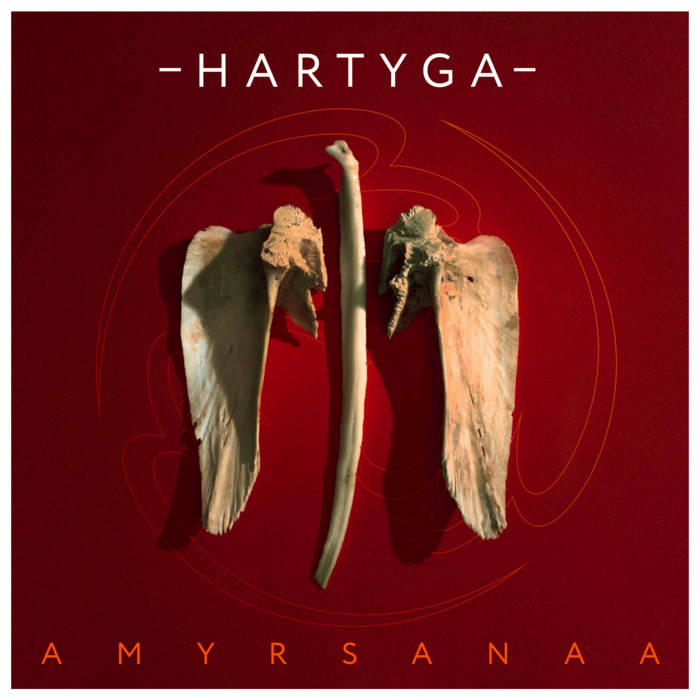 The album "AMYRSANAA" is the third produced by Hartyga, a band from Kyzyl, Tuva. "AMYRSANAA" was recorded in May 2018 in Octopus Studios, Ekaterinburg (sound - producer - Shamil Gainetdinov)

The album is named after the song "Amyr Sanaa", written by the Tuvan rock-bard Alexander Sarzhat-Ool. Amyr Sanaa is both a historical figure and a legend. His name permeates the folk tales of many peoples. Kazakh, Altaics, Kalmyks, Mongols alike tell various versions of his heroic deeds.

During the 17th century he led the rebellion fighting the Manchu Qing for Zhungar independence. Legends say he could carry a red-hot anvil on his back! Once he carved steps out of the rock of a mountain near Chaa-Hol working alone, over the course of a single night, so that there would be a path for his horses. A vein of copper ore was discovered where the hero’s horse lost its horseshoe. One can hear from the lyrics of “Amyr Sanaa” the longing of the people for the nomadic lifestyle and the traditions they lost in the 20th century.

When will you return to your homeland
In the center of Asia, Amyr-Sanaa?
Are your commands not
in the legends of our ancestors?
When the black mark
Disappears from the rabbit’s ears,
When the iron birds
Begin to fly,
Will you return to us as promised?

We remember and call you!
We bless and glorify you!
Come and lead us,
Your descendants, Amyr-Sanaa!

We lost our herds
Which were always huge.
Our descents become ever more foreign.
As you promised
On the Chindilig stone statues,
Sit on horse and visit your people,
While the arjaan-wells have not dried out.

In the name of a bright future
Men forced to cut the braids.
Brides ceased to keep virginity
Before marriage.
Hear the melody of the igil
Which call for the preservation of roots.
Not all traditions are lost.
Before it's too late, come and help!

Alexander Sarzhat-Ool called his rock group “Amyr Sanaa”, which he founded in the late 70s, while still in prison. The lyrics of his songs convey the both a powerful protest against his contemporary challenges and an independent lyrical touch, common to the rock-poets of that period. His songs were very varied, ranging from simple protests against modernity to deep poeticism and even tragedy.
One of his works is “Kyzyl Syldys” – which is blunt in giving the listener an understanding of the poet’s thoughts about eternity and his present.
Red Star

Tired of living like the majority
It's like walking in shackles.
Let my withered body
Be feasted on by worms.

If I will die — over my grave
The red star does not shine!
This medal from relatives and friends
Not for me, you must know!

And still my soul
Flies to heaven
Leave my mortal body
To the predatory eagles.


While alive I will be on my knees
Relentlessly asking God –
If my song breaks
Send down death to me.

He mixed folk tunes together with his social critiques. These ancient Tuvan songs included “Moy Mezhegei” and “Tomzha”.

Kaa-Hem is filled with heat.
The shore is wide and steep.
Sparks spray on the river
Near my Mezhegei valley.


“Moy Mezhegei” praises the beauty of the valleys which crisscross the heart of Tyva. And “Tomazha” is from the North-East of Tyva. Todzha – is the only region of Tyva in which there are deer herders. Living in the toughest climate, the people of the area make fun of the other Tuvans, and their ‘first world problems’, jokingly feeling their own superiority in return.

Tozhu's girl riding a deer
Goes home in Chazylary.
The young guy climbing the bull
Looks at her from the hillock.

As if on a magic firebird
Tozhu's girl flies to her home.
The guy from river just remains
Ride on the back of goat.

In March 2018, during one of our rehersals, the lead guitarist, Nachin Choreve, played a cool riff, which the other band members liked. They insisted that Nachin would write lyrics for this music. Thus, “Moy Kargyraa” was born, a song resembling age old Tuvan folk tunes in structure. It contains all the essential elements of a Tuvan folk song – a horse, a beautiful girl and nature.

My trotter-horse is flying ahead,
Briskly hoofs the ground.
For someone whose hair is black,
Shall I give in and sing my kargyraa?

“Collective Farmer” is a song which continues the hardworking tradition of Tuvan Social Realism. Composed in the 30s, it is devoted to heroes of labour. Its lyrics are not pure propaganda but are rather lyrical, poetic and melodic in style. Ancient wisdom and a people confident in their history makes even dry politics into fantastic music:

I am a Сollective Farmer
The song of lark like the khomus
Free pours through the fields.
And I live so freely.
I am a collective farmer, I am a peasant.

“Song of the Orphan” is the most tragic piece. It was first performed by Hartyga during the “Fugue for steppe and organ” in which it was transformed into a lengthy improvisation. In the current version, it has turned into a wonderful sax solo by Sergek Sandyk:
Oskustun Yry (Orphan's Lament )

I'll walk staggering with fatigue.
If I fall I will die.
Yellow jets of sand, like worms,
Will intertwine with me, absorbing my body.

We are psychodelic ethno-rock band HARTYGA and we are working to improve our art of playing the traditional Tuvan musical instruments and “kargyraa” and “hoomey” throat singing. Our mission is to introduce the entire world to the Tuvinian musical heritage in contemporary interpretation and to show our ancient culture as a vivid evolving source of joy and inspiration. ... more

Bandcamp Daily  your guide to the world of Bandcamp

Featuring Gary Bartz, 5 years of Rhythm Section Intl and an LP of the week by Nicolas Jaar